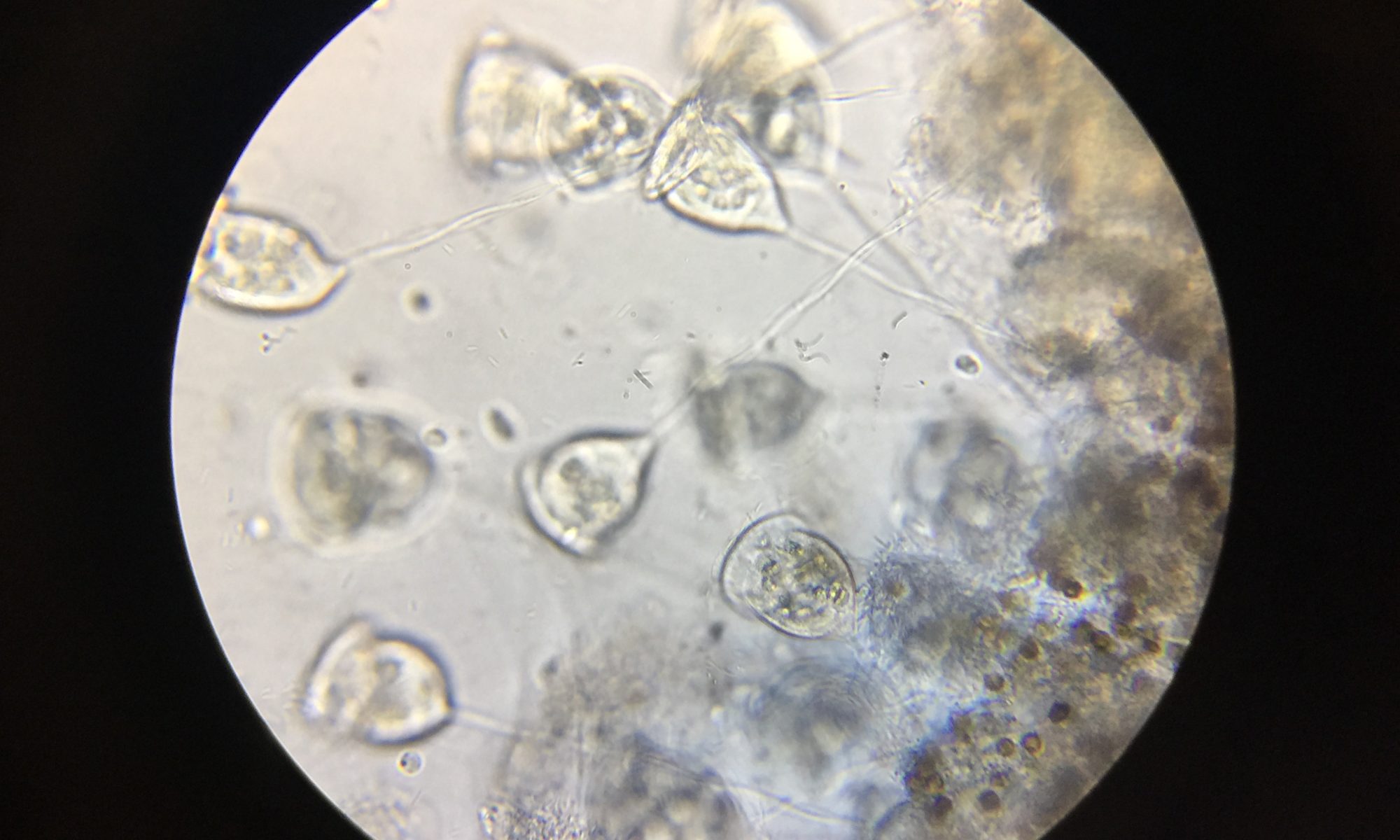 The 1st two slides were basically the same: lots of peritrichs. Unfortunately, I have to say that the infusoria has been quite uninteresting so far. But it kind of makes me wonder why peritrichs are so successful. I may have mentioned regarding a former slide that the peritrichs (namely Vorticella) were doing quite well, along with some rotifers. So there must be something about organisms that attach and suspend themselves to/from substrates that makes them so successful.

I do know that many organisms (mainly ciliates) subscribe to the usage of a feeding current/vortex, with which they suck in food into their cytostomes/mouths. Also, many organisms are sessile, connected to a subtrate by means of a stack or adhesion. Peritrichs, mostly in the order Sessilida, combine the two characteristics of the feeding vortex and sessility, and together produce a very successful organism. But which attribute is the key to the organisms success; feeding vortexes, or sessility?

Feeding vortexes usually occur when the organism is sessile. Furthermore, sessility is widely chosen as a prime function for many bacteria who, rather than waste energy traversing the water collumn via flagella, choose to remaim attached to a substrate. Feeding vortexes also seem to use lots of energy, especially for organisms such as Vorticella and Bdelloid rotifers. The vortexes of these organisms are also considerably larger than the vortexes of typically mobile organisms such as Paramecium. So is it the organisms sessility that allows for a larger and stronger feeding vortex? If so, how reliable is the feeding vortex? Only things caught in the current have a chance of being ingested. These organisms are not exactly hunters. Rather, they are oppertunists; waiting for morsels of food to flow into their mouths. On one of the infusoria slides, I observed that the Sessilids there were living off of thousands of small flagellates that lived among the detritus. In later viewings, there were noticably less Sessilids, and almost no flagellates.

So it seems the organisms’ success depends on 3 factors: Sessility, a strong feeding vortex, and an abundance of food. To support this, in times of starvation, many Sessilids will lose their stalk, gain a posterior ring of cilia, and swim off to areas which may contain more food (this form is called a telotroch). I don’t recall an increase in teletrochs when the flagellates died out, but it certainly makes sense that the sessilids would form telotrochs in times of starvation.

In conclusion, the organisms’ ability to become sessile in a nutrient-rich environement is the organisms’ success. As long as there is the correct food, sessile organisms will thrive. In once slide, I noticed an increase in smaller organisms as the larger ones died out…all except for the sessilids and bdelloid rotifers, of course. From this instance, a direct connection can be perceived from the success of these two types of organisms. But now, another question arises…How are the smaller organisms so successful? Is it because the larger organsism died out? If so, why did they die out if they had plenty of food?